We want to introduce you to Rwanda’s newest national park Nyungwe, a closed canopy rainforest home to 13 species of primate
including chimpanzees. Nyungwe Forest is the largest single forest block in Africa, one of the last  high-altitude primary forests and one of the largest mountainous rainforest 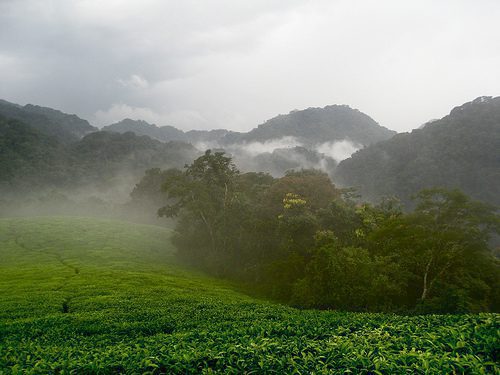 on the entire continent. Nyungwe is located in southern Rwanda and it was established as a forest reserve in 1933. Just recently it received National Park status, making it East Africa’s largest protected high-altitude rainforest.

The conservation area consists of approximately 378 square miles with an elevation of 5,600 to 9,700 feet, and temperatures. Temperatures range from 32-85 degrees F with an average daytime temperature of 60 degrees F. Rainfall in Nyungwe averages between 71 and 78 inches per year, and the rainy season runs from September to May, with the main dry season being June to August, and several dry weeks experienced in December and January. The forest is located in the Albertine Rift, a series of mountain ranges beginning at the Rwenzori mountains in western Uganda and Congo, continuing south into the
Lendu Plateau in eastern Congo. Nyungwe is contiguous with Kibira National Park in Burundi.

Nyungwe is made up of a complex matrix of Albertine Rift montane forest, and it is known for its rugged terrain and complex mosaic of dense vegetation types from tall dense forests to open, flower filled marshes. The park has a varied topography with varied soil types providing microhabitats for both plants and animals. Moist, fertile soil supports tall forests, while dry ridges provide habitat for shorter trees and thickets. The southeastern portion of the forest is blanketed with bamboo, an important commodity, while flooded forests, marshes, and open herbaceous ground cover are interspersed throughout. With terrain ranging from 1,600 to 3,000 meters above sea level, trekkers and motorists crossing the forest on the surfaced road from Butare to Cyangungu, on the shores of Lake Kivu, are offered some truly breathtaking scenery. It features a succession of peaks and hilltop crests and the road passes high above steep sided valleys where the rich equatorial forest can be seen way below.

Nyungwe’s biodiversity is astonishing and it is one of the most endemic species-rich areas in all of Africa. Nyungwe is a protected reserve for many species of smaller primates such as the black and white colobus monkeys, chimpanzees and mangabeys. In addition to monkeys, the forest includes black-breasted and yellow-backed antelopes, leopards, servals and porcupines. At the Uwinka reception centre, there is a skull of a mountain elephant on display. It is much smaller than its savannah dwelling counterpart and this would seem to be the last trace of a lost species. Before the war several of them sought refuge in the Kamiranzovu marshes, north-west of Nyungwe.Together with its biodiversity, Nyungwe is an important  water catchment for Rwanda. This entire mountain range, part of the Congo-Nile Crest that cuts Rwanda in half from north to south, is literally awash with rivers and water courses. The source of one of Rwanda´s major rivers, the Akanyaru, is found in the Nyungwe Forest.

Nyungwe Forest Lodge is situated in a tea plantation on the very edge of the Nyungwe National Park. Boasting twenty-two spacious villa rooms

and two luxurious suites, Nyungwe offers supreme comfort and style amongst the rolling hills of Rwanda.

All rooms and suites in the lodge face the forest and the lodge comprises 15 luxury rooms with a king-size bed, 7 luxury rooms with a twin bed. These rooms sleep a maximum of 2 adults each. 2 suites with king-size beds, which are connected to a second luxury room with a twin bed. Rooms and suites feature a fireplace, air conditioning, private deck and en-suite bathroom. Among its elegant facilities, the lodge boasts a bistro, an outdoor heated swimming pool, a boma area for outdoor dining and drinks and relaxation retreat with 2 treatment rooms and a Jacuzzi pool.

Nyungwe Forest Lodge is ideal for those who seek adventure and activities and for those who seek to relax after an adventure packed trip to Rwanda alike. Activities through the Lodge include chimpanzee trekking, black and white Colobus monkey trekking, grey-cheeked Mangabey trekking, Blue Monkey and Golden Monkey Trekking, Kamiranzovu Swamp walk, Kamiranzovu Waterfall walk, various guided walking trails ranging in length from 1 to 7 hours, bird watching and cultural walk with a guide.

Access to the Nyungwe National Park is subject the purchase of a permit, which can be arranged prior to your arrival or at the lodge itself. The lodge is roughly 250 km away from Kigali a drive of 4 – 5 hours.