It’s been nearly 6 months since Game Plan Africa joined the Extraordinary Journeys team. So what has Vee been up to?

Recently, Vee led two small group trips to Africa, one to South Africa and one to Botswana.

South Africa has often been called “A World in One Country” due to its magnificent scenic beauty, multiethnic heritage and fascinating history, lovely beaches and multiple game viewing opportunities in diverse habitats.

Our journey started in Cape Town and included the general highlights of any stay in this beautiful city. The Peninsula Tour hugs the coastline of the southern tip of Africa and includes scenic stops of the 12 Apostles, Chapman’s Peak and Boulder’s Beach along the way. At Cape Point Nature Reserve, a World Heritage site, we enjoyed the Flying Dutchman funicular ride up to the lighthouse and also hiked over the cliffs down to the beach. 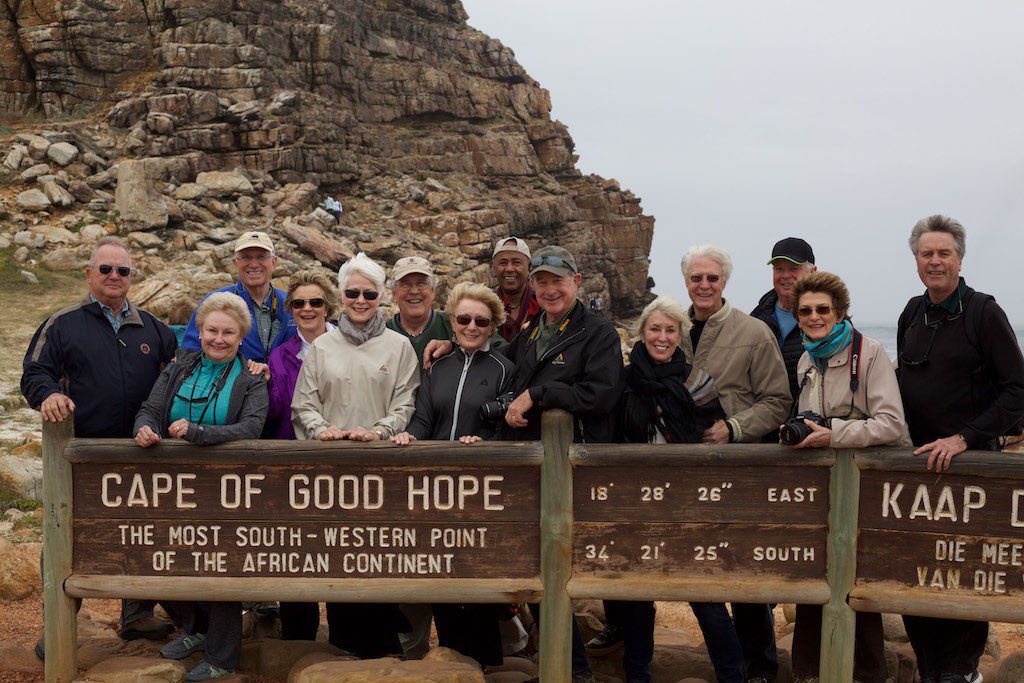 The historic wine route is not just for wine enthusiasts. The majestic mountain scenery, Cape Dutch architecture and picturesque vineyards add to the experience. The Waterford Wine Estate in Stellenbosch offers a unique wine tasting with homemade chocolate to complement each wine. Being mostly chocolate lovers, this was a big hit with the group.

When travelling on their first safari, clients are often concerned about the quality of the food. South Africa has excellent fresh produce and the accommodations and restaurants we recommend are all world-class. Our dinner at Gold’s restaurant was very festive with all of us (i.e. the whole restaurant) participating in the interactive drumming circle followed by eating an array of traditional dishes. Although it is a little touristy, the evening showcased the vibrancy and energy of the African people.

We also treated our group to a wine pairing dinner at The Test Kitchen. Voted 22nd best restaurant in the world in 2016, it lived up to its reputation. In an open plan setting, we were able to observe the chefs as they produced one course after another of unique, artistic dishes bursting with flavor.

Our full day cultural tour included Robben Island where Nelson Mandela spent 18 of his 27 years in prison, followed by an emotional visit to the Iliso Care Center in Khayelitsha, one of the poorest shanty towns of Cape Town.

The overall aim of Iliso Care Center is to improve the quality of life for woman and children in the township through gardening, sewing and catering. They also have a crèche, with after school care and sports programs for the school children. We were entertained by members of their choir before touring the soup kitchen, crèche and afterschool rooms. There is no actual building, just a bunch of shipping containers connected together stuck between a couple of shacks. Our fresh supplies for the soup kitchen and the school supplies from the USA were greatly appreciated. Our specialist cultural guide during this tour was Thando. He was born in a political prison during the Apartheid era and raised by a loving foster parent who made sure he received a good education. Like his parents, he became politically active, becoming a freedom fighter or terrorist (depending on your viewpoint). Today he is one of the most sought after guides into the townships. If you are unable to experience the townships in Cape Town, most of the game lodges are adjacent to some of the poorest communities in Africa and it is well worth visiting them to meet the local people and see the valuable projects the lodges support.

We bade farewell to Cape Town and for the next 6 nights ventured into the wild for some game viewing. Ngala Tented Camp in a private concession of the Kruger National Park was our first stop. “Tented” had my group a little concerned about canvas being the only barrier between them and the wild, but I assured them that they would be safe as long as they did not venture out at night. You cannot beat the night sounds of the bush while snuggled under beautiful linens and they thoroughly enjoyed the experience.

There is nothing primitive about this modern luxury camp. The tents, with bathroom en-suite, are furnished with all the mod cons including air conditioning, fridge with complimentary drinks and snacks, twin basins, outdoor enclosed shower and indoor bath. Behind the bed were two large desk tops that opened up to mirrors with storage space underneath. This was extremely handy for working on computers, editing photos and charging equipment. The free Wi-Fi was an added bonus as more and more lodges are offering this service. Guests were surprised at the luxury of this tented camp and it turned out to be their favorite camp.

The game viewing was exceptional and we had many intimate wildlife encounters. On our first afternoon drive we saw elephant, lion and buffalo amongst many other more common species like impala, warthog, nyala and giraffe. A highlight was observing a herd of elephants at sunset playing and drinking at a waterhole.

Activities at Ngala included twice daily open vehicle game drives, night drives and bush walks. Our guides Lee Anne and Andre were outstanding in every respect. Great personalities, excellent knowledge and obviously loved their jobs. What struck me most about this camp was the exceptional interaction between the guides and trackers. With a limited number of game vehicles traversing this vast area, they had to work harder to find and track the animals. We came upon a number of great sightings due to their diligence in tracking and communicating. Our group was amazed at how they did this and added to the enjoyment of the game drives. The game viewing could not have been better. We viewed the Big Five on several occasions, the leopard, elephant and lion sightings being the most impressive.

The weather was unusually cold so the small but well stocked curio shop did great business providing some more warm clothing.

Our trip from Ngala Tented Camp to Exeter River Lodge in the famous Sabi Sands Private Game Reserve was along the bumpy back roads of the Shangaan tribal community. I like clients to see how the local people live outside of the Kruger National Park and the luxury private game reserves as it highlights how important it is to support these communities. Most of the lodges support a school, crèche or clinic and provide training and employment.

The lodge layout and design is modern, open, bright and airy. Lunch under the large ebony tree overlooking the river was special with some added entertainment as cheeky monkeys were kept at bay by dedicated staff members. 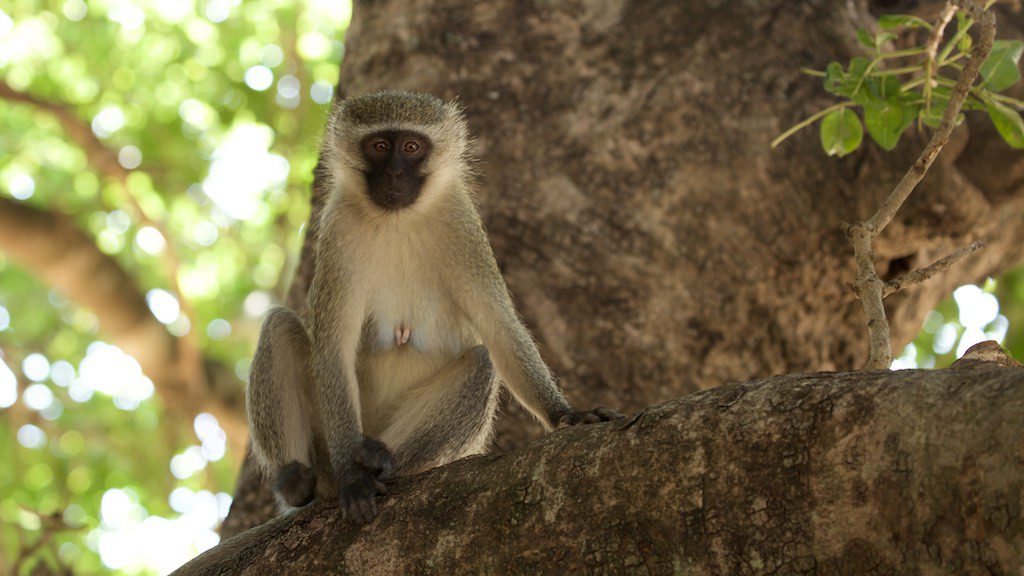 What an absolute joy to sit on the deck, whether in your room or the main lounge area. We had elephants crossing the river several times and after breakfast one morning, a leopard walked along the riverbed past the camp. An old buffalo hung around during our stay and there were always some general game and exotic birds to see.

On our last night we returned to the lodge with spotlights and viewed a male and female lion lying on an island directly across from the lodge. Those planning private dinners on their deck that night had to cancel this experience. 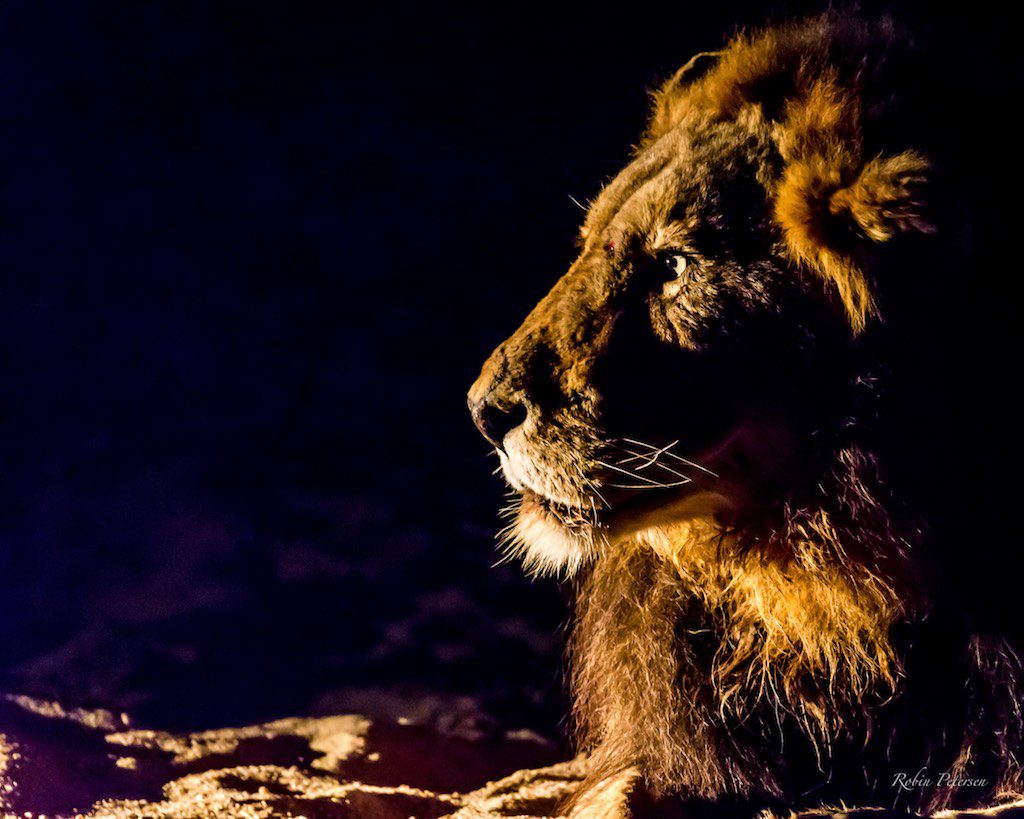 Once again, game viewing was excellent. The guides and trackers did not have to work as hard as the Ngala staff as this Western sector of the Sabi Sands Game Reserve is traversed by several of the lodges including Leopard Hills, Savanna, Dulini, Inyati, Idube and Ulusaba. I have stayed at most of these lodges and done many game drives and I’m always impressed with the way special sightings are handled. Through radio contact, they are able to communicate with one another and stagger the viewings so that at no time do you feel crowded out, and generally, you don’t come across other vehicles.

At both lodges, management went out of their way to provide special experiences. We had brunch in the bush, a surprise pancake stop, a champagne stop, outdoor dinners and tribal dancing and staff singing and dancing in the dinner boma. 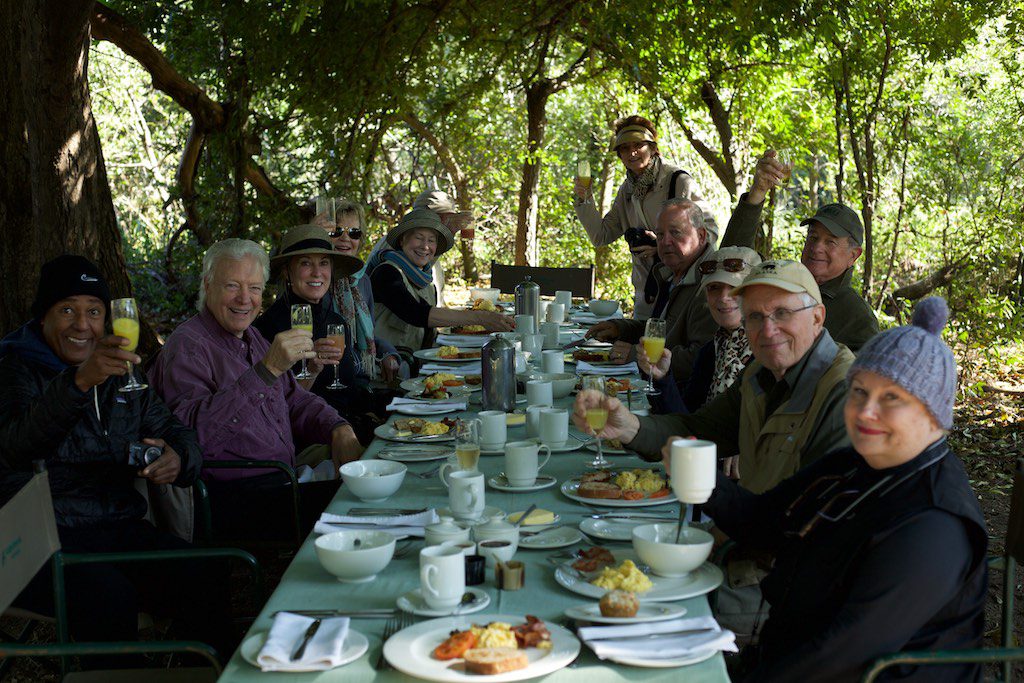 Our guides and trackers at Exeter were equally passionate about conservation. Game viewing was excellent and we saw the Big Five on several occasions. A highlight for everyone, including the guides and trackers, was the viewing of two male leopards sitting and growling close to each other at the border of their territories. The noise attracted the attention of a large female lion that appeared out of the blue, scattering the two leopards in different directions. Both vehicles had great views of the scene. 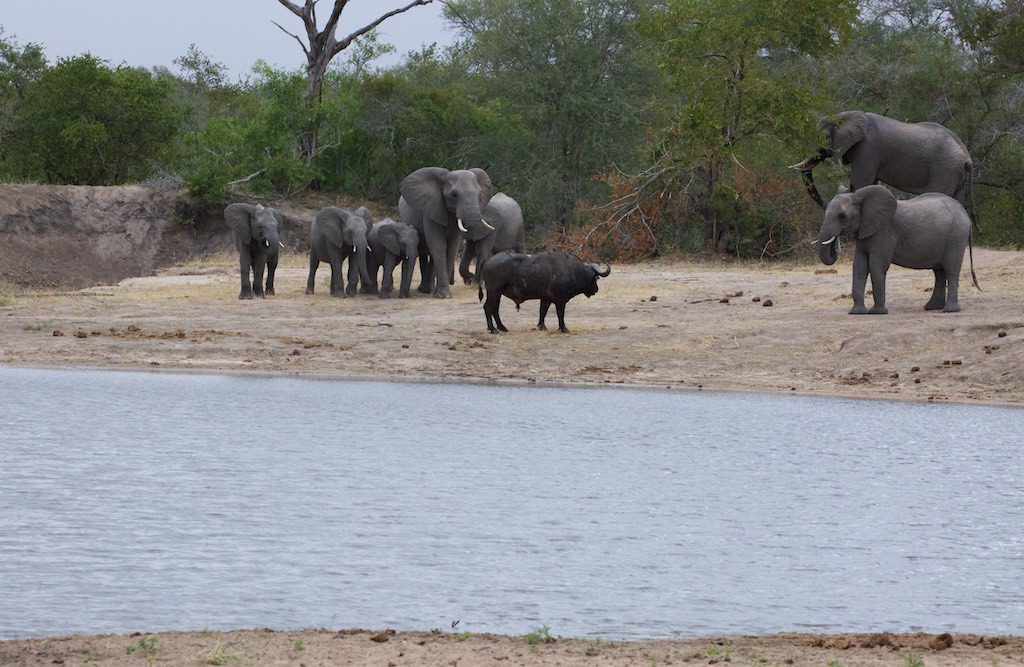 At the end of our stay at Exeter, we flew on the Federal Air flight directly to Johannesburg and bid farewell. Everyone in the group expressed their gratitude and their absolute pleasure at having taken the trip they described as ‘a trip of a lifetime’.