Catch Up With Game Plan Africa’s Vee Thompson, Part 2, We met our group at the Johannesburg International Airport off the long flight from Atlanta. We spent the night at the City Lodge, conveniently perched on top of the airport parking lot, before heading off to Botswana the next morning.

We arrived in Maun where Wilderness Safaris met us for our light aircraft hop to the Chitabe Airstrip. Within 2 minutes of our road transfer to Chitabe Lediba Camp, our guide spotted two large male lions having an afternoon nap under a bush. It was such a joy to see the excited looks on our guest’s faces at this wonderful encounter so soon after arrival. 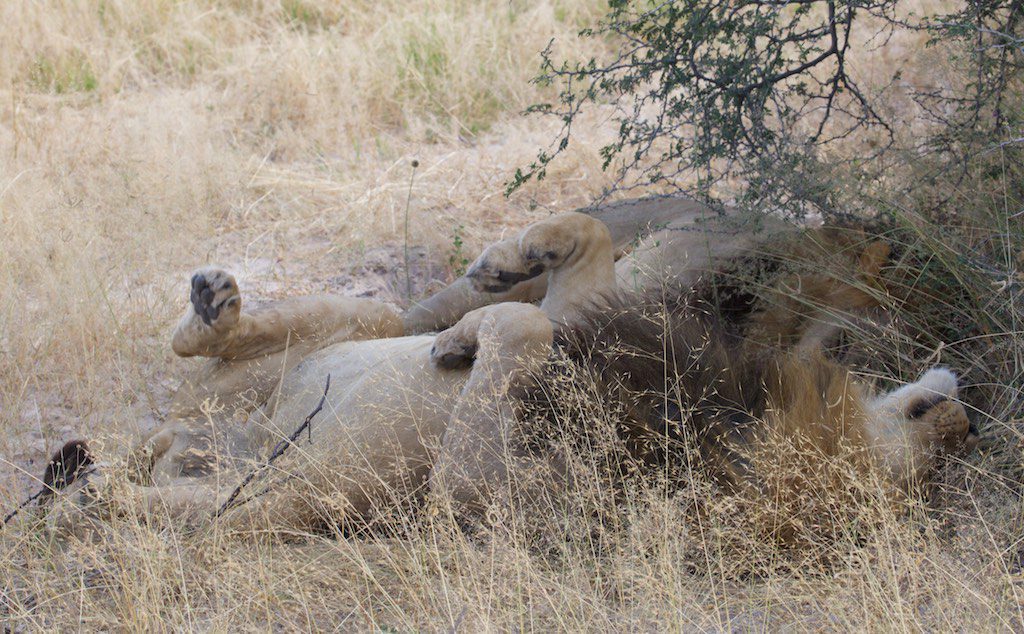 As we drove into camp, we were greeted by a group of smiling staff singing and ululating “Dumela,” which in Setswana means “Welcome”. The singing greeting is one of the special rituals we enjoy about the Wilderness Safaris camps.

Chitabe Lediba is set on a very large island with beautiful open views of the plains. All luxury tents are on raised decks connected by raised wooden walkways. One of my favorite spots was the separate deck, with the fire pit, used for early morning coffee or drinks before dinner.
I’m often asked which country in Africa is my favorite. Each has its own special attractions but for pristine, remote wilderness, lack of people and vehicles, no light pollution to detract from the starry evening skies and excellent game viewing, I would choose the Okavango Delta in Botswana. There was much excitement at Chitabe Lediba as the Marula trees, dotted throughout the camp, were bearing fruit. Elephant love Marula berries and on the first night, a large bull elephant proceeded to munch the ripe fruit right next to one of our guest’s tent. Even though the guests had been assured that they would be absolutely safe behind their canvas wall, it was an adrenalin rush and the excitement did not abate when they had to be collected from their deck for morning coffee the next morning. 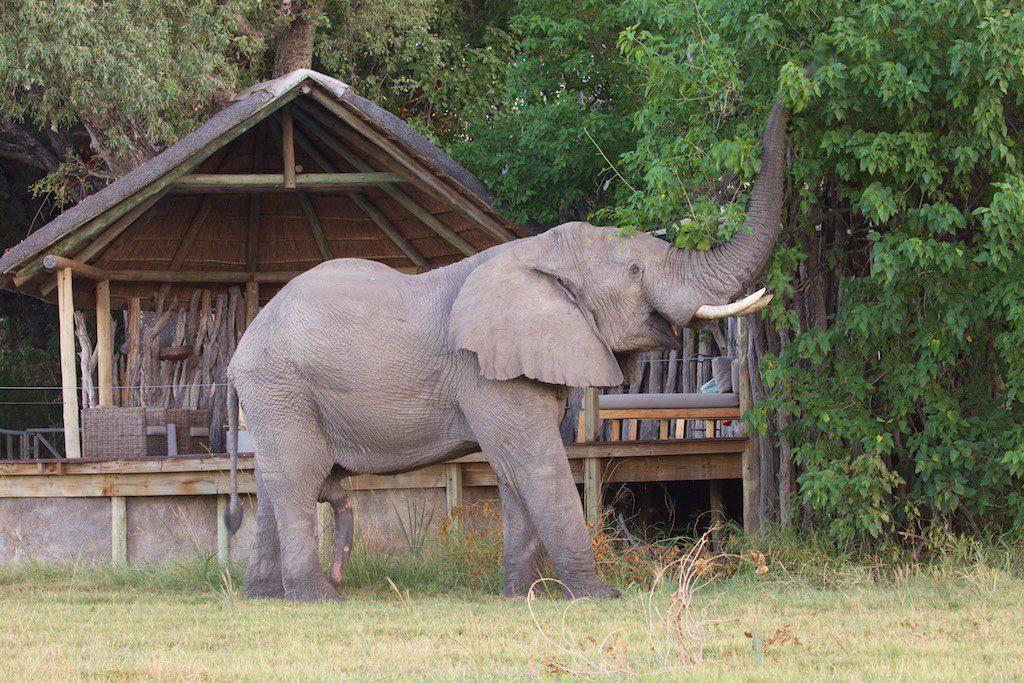 We spent 3 nights at Chitabe and had many memorable game viewing experiences. Our guide BB’s patience following a young leopard on the hunt was rewarded with an unusual sighting. A civet sprang out of the bush and the leopard gave chase in front of us. The civet escaped but I don’t think the leopard was disappointed as it would have been a messy battle.

Our next camp, Little Vumbura, is in the heart of the Okavango Delta. Our pilot flew low over this magnificent oasis, the largest inland delta in the world. For as far as the eye can see, palm and papyrus fringed waterways passed palm fringed islands and thickets of woodland. We really felt like we were in unique untouched territory. 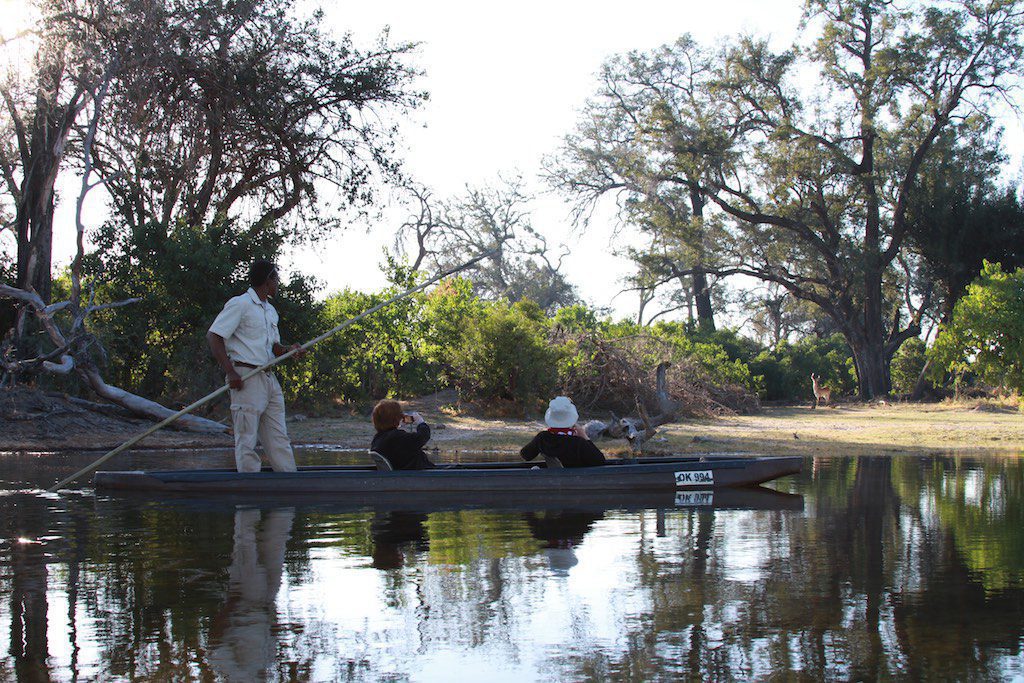 Little Vumbura is a delightful camp surrounded by water and one of my favorites. The variety of experiences offered at this water/land combination camp make you appreciate the diverse habitat. The tranquility of the mokoro trip gliding through the reeds to an island coffee spot was a big contrast to the powerboat ride zigzagging up the narrow channel to a large open pool to see the hippos. 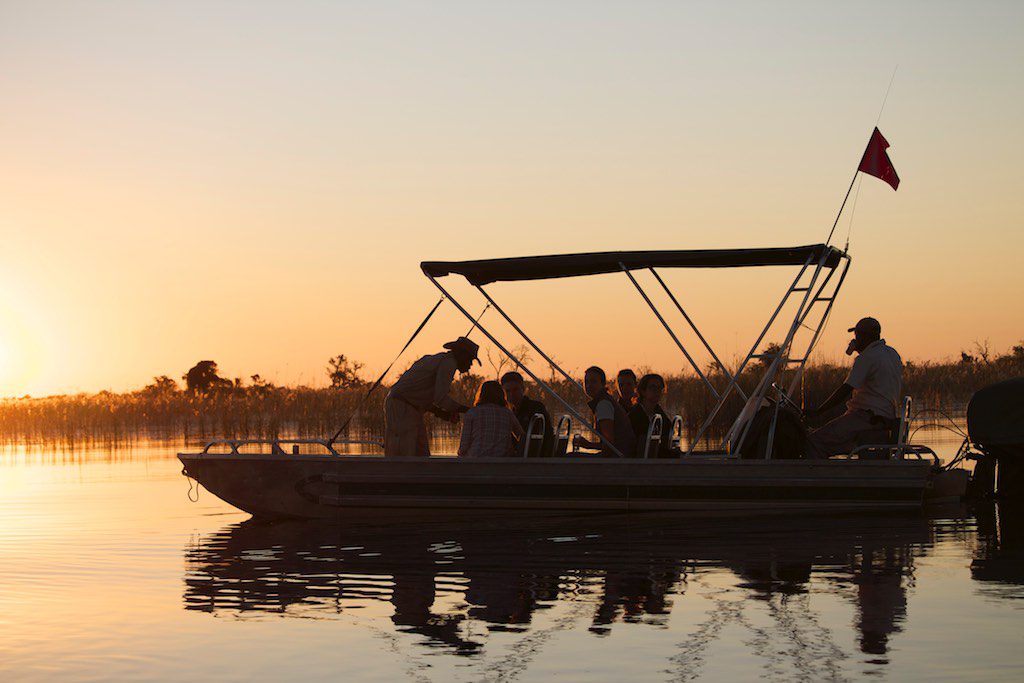 Game viewing here was excellent. We followed a pack of wild dog on the hunt, and although the hunt was unsuccessful, it was a joy to witness the strategy of the hunt. A pride of eight lions gave up on a buffalo hunt so we followed them through the open plains as they kept a lookout for their next meal. Another unusual sight was a herd of sable antelope sitting in the middle of an open plain. Our close proximity did not deter them in the least. Most of the time at Little Vumbura we had to be escorted to and from our tents during the day as a couple of elephants decided to remain on the island throughout our stay.

Russel, one of the managers, did an excellent PowerPoint presentation on the geology and history of the Okavango Delta.

Our last camp was Duma Tau, set in a lagoon on the Linyanti river system between two “elephant highways” and it lived up to this reputation. The camp layout was the most stunning of the three camps. The airy modern main areas and tented rooms all had sweeping dramatic views of the river. The best elephant viewing was on our private sunset pontoon cruise. We sipped our cocktails while the elephants drank and frolicked in the water. 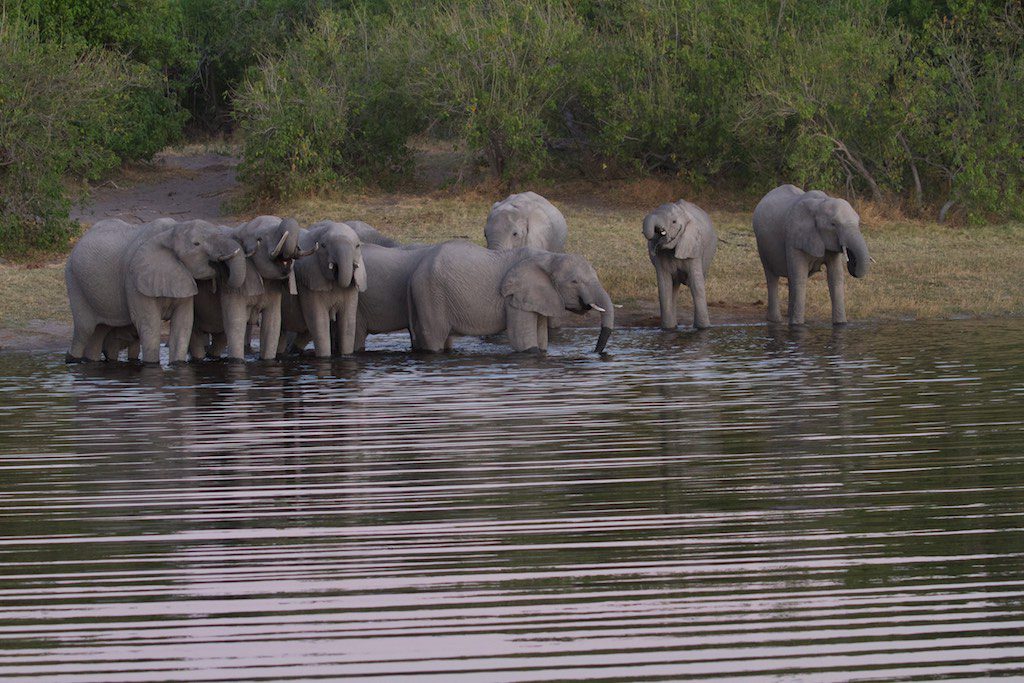 Tank was our favorite guide in Botswana. He had great knowledge, a lovely personality and was very attentive. Besides the general game, we were fortunate to see two different leopard sighting and our third viewing of wild dog.

After so many days of excellent game viewing, we focused on bird spotting.

Sundowners are a special tradition on safari. Nothing beats an ice cold glass of white wine or gin and tonic while watching the glorious African sunset during a game drive. 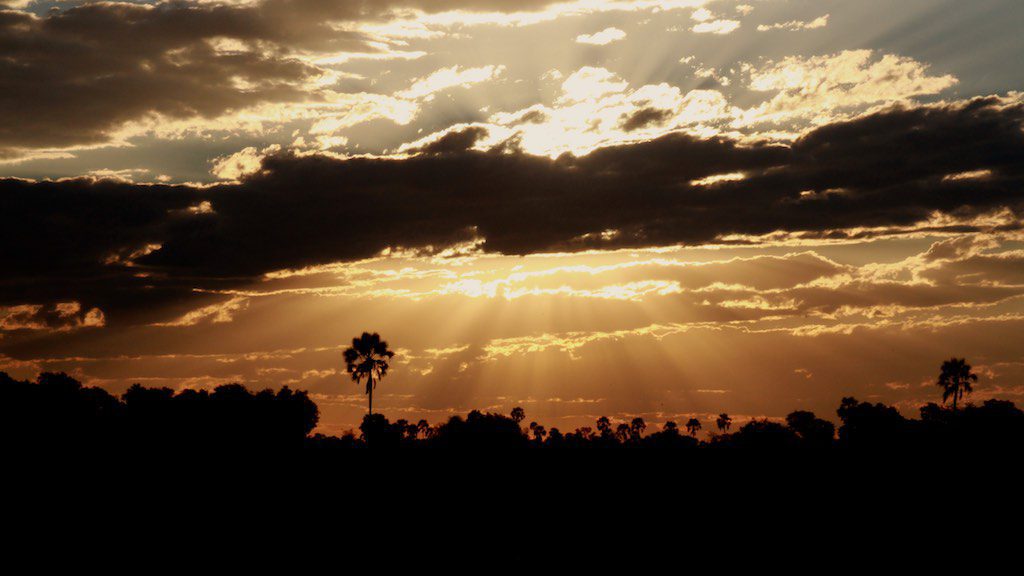 Dave and I left our guests at the Duma Tau airstrip as we headed off to do some site inspections of other Botswana camps. They continued their journey to explore Victoria Falls for another 2 nights under the care of Wilderness Safaris, our partner on the ground.